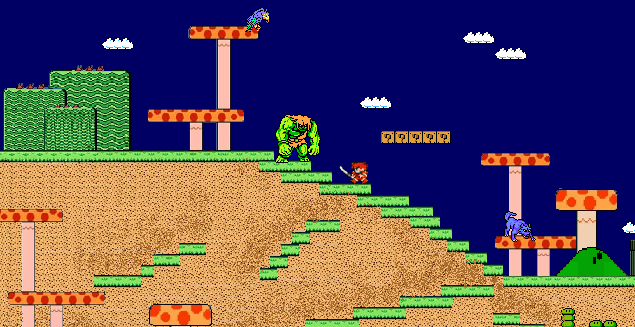 At the top of the mountain, he finds three grassy mounds towering high overhead, nearby a pair of TowaShrooms. A mournful caw catches his attention, and he peers into the misty shadow. There, perched atop the highest TowaShroom, sits a Giant Eagle. Even as Jack reaches for the Dancing Dagger of Danzibar, a curious fact strikes him. The Eagle wears a saddle and harness, empty now, carved and painted all over in a floral design. In the center of the twining leaves and blossoms shines the image of a brilliantly plumed bird, blue of head and green of wing, with an orange and blue belly – a Rainbow Lorikeet.

Jack sighs softly to himself and returns his sword to its sheath. Here, then, lingers the loyal mount of a warrior-woman of the Lorikeet Guard, the elite aerial cavalry assigned the task of protecting Princess Vasilisa of Windflower Palace. There can be no further doubt; he has come to the right place. Far above, in the clouds already half-obscured by the mystic night, hides the castle of a Cloud Giant, and within that castle, hopefully still alive, languishes the young Princess. The Eagle, spying Jack below, issues a long, mournful screech.

“Do not fear, friend,” Jack whispers. “It will not be much longer now.”

Even as he speaks, the grassy mounds begin to tremble, the scrape of scaly body on stone resounds through the deepening silence, and a procession of long snaky necks begins to emerge from a hollow among the mounds.

Night has fallen and the Pyrohydra of Crumbling Peak is stirring from its slumber!

The purses of the Ogres yield 492 Gold! Add this and 15 StarSteel to the Pouch of Ghrul.