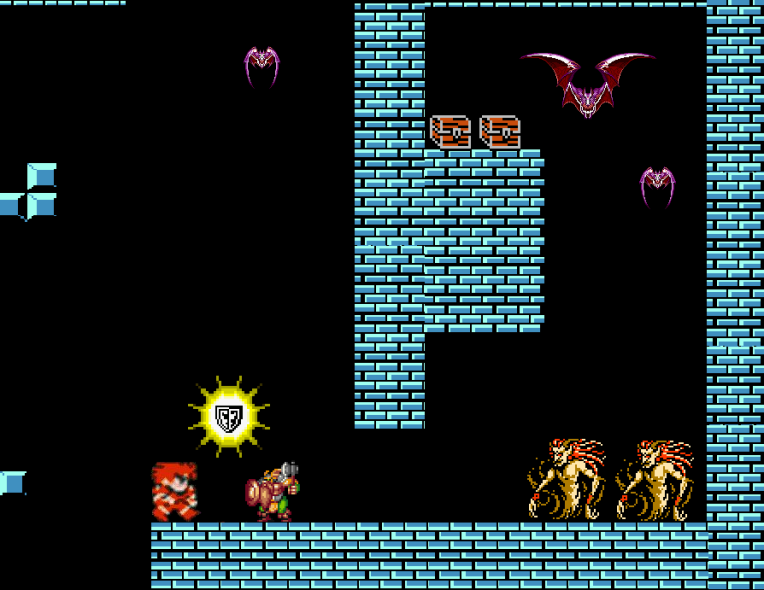 “What kind of shield can you make with them?”

The Dwarf grins. “Jes’ hand ‘em over, boyo. Ye’ll see soon enough what ol’ Fearghal can do with some StarSteel.”

Jack counts out the coins to the Dwarf, and Fearghal gestures him deeper into the corridor, past a pair of Earth Elementals who stand guard. Fearghal stops at the wall behind the Elementals and touches a hidden stone, causing a panel to swing open. He gestures to Jack, and the warrior ducks his head, entering a stone corridor. They walk in darkness and silence for a moment, until the corridor opens out into a well-outfitted smithy. The furnace in the corner gives off terrific heat – but there is no sign of coal or wood to power it. Fearghal sees the drift of Jack’s thoughts and grins ferociously.

“I use a Dragon’s Furnace to keep my fires burning – the same thing the Dragon used to heat his, before I deprived him of his life. You keep that in mind, lad – anytime you slay a creature of fire, make sure you cut him open and have a look at his guts. There’s bound to be a blazin’ hot ruby inside, just waitin’ to be put to honest use. ‘Course they don’t last forever – I’ve used this one for years, and without a Dragon’s belly to feed the fire, the gem’s beginnin’ to lose its magic. I think this’ll be the last shield I forge with this furnace. Make you a deal, lad – you ever come across a flame creature’s furnace, you bring it to me and I’ll forge ye somethin’ with it in exchange. Deal?”

“Agreed,” Jack says readily – thinking all the while of the Pyrohydra he is meant to slay.

“Now then, let’s see about them StarSteel coins.” The Dwarf casts the coins into a crucible, which he thrusts into the terrible heat of the Dragon’s Furnace.

“It’ll be a day at least before I can work it,” he says. “StarSteel’s hard as diamond, takes forever to melt.”

True to the Dwarf’s word, the metal is soft enough to work in a day – and after two days of labor, the shield is ready. In the meantime, the Dwarves and their fiery King play excellent host. When the shield is ready, Fearghal presents it to Jack in the presence of the entire Clan, who watch with mingled appreciation and envy.

“The Shield of Balance,” Fearghal proclaims, holding the item aloft. The shield looks to be annealed of two metals, one dark and leaden, the other bright and silvery. They are swirled together in a beautiful pattern reminiscent of the eternal dance of light and shadow. The shield perfectly exhibits the twin nature of StarSteel – a metal born of the Moon’s light, yet dark as the infinite cosmos, less yielding than the strongest iron, yet weightless as the air.

“The Shield is reflective,” Fearghal tells Jack. “Magic rays, cones, missiles, and suchlike directed at yerself will be reflected back upon the caster when they strike the shield. A nasty surprise for yer Giant – and any other spell caster ye happen to stumble across.”

“You have my deepest thanks,” Jack tells the Dwarf, clasping his hand sincerely.

Fearghal snorts. “Ye can thank me by comin’ back alive, with a new fire for my furnace.” His manner softens. “But, yer welcome. May it serve ye well.”

Remove 100 StarSteel Coins from the Pouch of Ghrul, and add the Shield of Balance.

Add the following to Jack’s Journal: Fearghal Notchblade, the Dwarven swordsmith, bids me obtain a Dragon’s Furnace to fuel his furnace. If I claim one for him, he will use it to forge something for me.

If you wish to purchase more items from Fearghal, turn to 28.

If not, then it is time for Jack to leave. If you think Jack should go confront the Pyrohydra immediately, turn to 9.