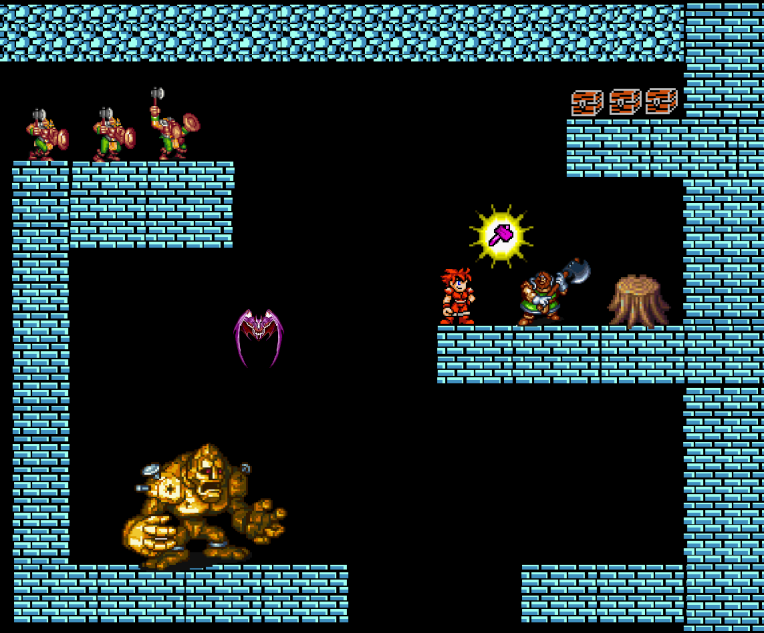 “Where do you think I got these fine items? Care for a game?”

The Dwarf King peers eagerly at the Knucklebones and laughs uproariously. “Good man!” he cries. “Ha! Most Dwarves take the skull as their trophy, to hang up in the Hall and collect dust! I’ve never seen a man take the knucklebones before! Well blast me with hellfire, lad, I do believe you’ve just instituted a new Oakstump tradition! There’ll be fine stories told when the boys bring out their knucklebones for a bit of a wager!”

Thorson claps Jack on the back. “Come on, then! I’ll wager ye’ve never killed a Giant in Dwarven style, and I’d be a poor host if I didn’t give ye the tools fer the job!”

Thorson leaps down two levels and lopes across the platform, Jack hot on his heels, pushing astonished Dwarf warriors aside. Together they leap from level to level, passing Earth Elementals guarding gems, Creeps devouring waste, and a pair of the mighty Worms of the Earth, standing guard over a hidden alcove near the roof of Oakstump Hall. Here the King stops and drags forth a moldering treasure chest.

“A relic of the old days,” he confides, hauling up the lid of the chest. He dashes aside heaps of coins and gems, and draws forth a magnificent warhammer with a glittering, diamond-studded Mithril head.

“Stormfist,” the King whispers reverently. “A Giantslayer’s weapon to beat all others, forged by my great-great-great-grandfather Heinrek to slay Maxolon the Putrescent, an undead Giant who haunted the Fellgaunt Swamp in ancient times. A powerful weapon against any foe, but against Giants it strikes with the power of the lightning itself. Take it with ye, and wield it well. The Giant yer lookin’ fer has his lair above Crumbling Peak; I’d stake my crown on that.”

“My thanks,” says Perilous Jack, taking the mighty hammer and stowing it in his magic pouch.

“Just bring it back, is all,” says the King. “If there’s anything else ye need, talk to old Fearghal, but knock half off any price he names – if he squeals, ye just show him that hammer, and he’ll shut up quick enough.”

Add Stormfist to the Pouch of Ghrul.

To buy more equipment from Fearghal, turn to 59. Don’t forget to cut each price in half.

If you do not wish to buy equipment from Fearghal, then Jack should be on his way.  If you think Jack should go confront the Pyrohydra immediately, turn to 9.