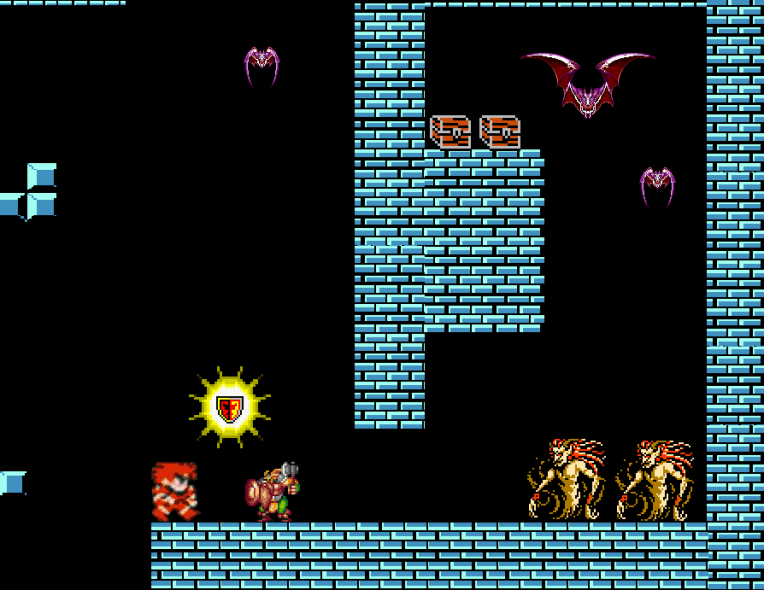 “What kind of shield can you make with them?”

The Dwarf grins. “Jes’ hand ‘em over, boyo. Ye’ll see soon enough what ol’ Fearghal can do with Dragon Scales.”

Jack hands the Scales over to the Dwarf, and Fearghal gestures him deeper into the corridor, past a pair of Earth Elementals who stand guard. Fearghal stops at the wall behind the Elementals and touches a hidden stone, causing a panel to swing open. He gestures to Jack, and the warrior ducks his head, entering a stone corridor. They walk in darkness and silence for a moment, until the corridor opens out into a well-outfitted smithy. The furnace in the corner gives off terrific heat – but there is no sign of coal or wood to power it. Fearghal sees the drift of Jack’s thoughts and grins ferociously.

“I use a Dragon’s Furnace to keep my fires burning – the same thing the Dragon used to heat his, before I deprived him of his life. You keep that in mind, lad – anytime you slay a creature of fire, make sure you cut him open and have a look at his guts. There’s bound to be a blazin’ hot ruby inside, just waitin’ to be put to honest use. ‘Course they don’t last forever – I’ve used this one for years, and without a Dragon’s belly to feed the fire, the gem’s beginnin’ to lose its magic. I think this’ll be the last shield I forge with this furnace. Make you a deal, lad – you ever come across a flame creature’s furnace, you bring it to me and I’ll forge ye somethin’ with it in exchange. Deal?”

“Agreed,” Jack says readily – thinking all the while of the Pyrohydra he is meant to slay.

Fearghal loads a crucible with the finest Dwarven steel and sets the metal to soften in the furnace. “Ye’ll be wantin’ to get comfortable, lad. This’ll take about three days.”

The Dwarf’s estimate is true; for three days Clan Oakstump hosts Jack in fine style, pumping him for tales of his adventures and for word of the strange night that has fallen over the land.

All the while Fearghal labors away in his forge, first crafting a fine steel shield, and then attaching the Dragon Scales with expert care. When the shield is finished, Fearghal presents it to Jack while the entire Clan looks on.

“The five Dragon races are mortal enemies, yet there are certain harmonies among them. Each race is equipped to do battle with a single, most-hated enemy. Thus, the Fire Dragons are best equipped to battle the Frost Dragons, and the Frosts to battle the Cobalts, and so on. This shield, forged of Fire and Frost Dragon Scales, will absorb ice and cold-related magic, and release the energy again in the form of heat – or vice versa! This makes it particularly effective against Frost Dragons and other winter creatures or against Fire Dragons and other volcano-dwellers.”

The Dwarf hands the Dragon Scale Shield to Jack, who accepts it reverently. “My thanks,” the warrior says.

The Dwarf bows. “May it serve you well.”

Remove the Dragon’s Scales from the Pouch of Ghrul, and add the Dragon Scale Shield.

Add the following to Jack’s Journal: Fearghal Notchblade, the Dwarven swordsmith, bids me obtain a Dragon’s Furnace to fuel his furnace. If I claim one for him, he will use it to forge something for me.

If you wish to purchase more items from Fearghal, turn to 28.

Otherwise, it is time for Jack to leave. If you think Jack should go confront the Pyrohydra immediately, turn to 9.