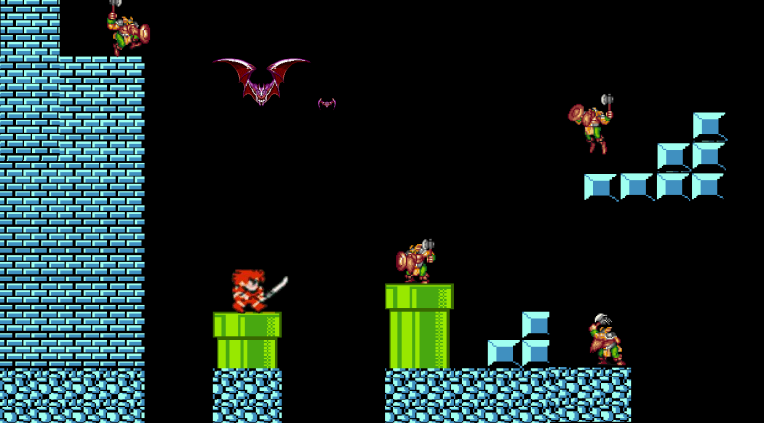 The Silver Man accepts them gravely, putting the first two in his mouth and the rest in a small pouch that hangs on his belt. When he has chewed the Emeralds – all the while gazing meditatively at the horizon – he turns and unlocks the cap of the GreenShaft he guards.

“You may enter,” he says. “Attack none of the Dwarf King’s subjects; neither injure his creatures, nor deface the stones of his kingdom, nor attempt to take that which is not freely given. The judgment of the Dwarf King is swift and sure.”

“I understand,” says Perilous Jack. He bows to the Silver Man and climbs down the GreenShaft, into the Warp Portal below.

Remove ten Emeralds from the Pouch of Ghrul.

Perilous Jack emerges from a GreenShaft in the floor of a huge subterranean chamber. The Dwarves have chosen the entrance to their home well; on all sides of the GreenShaft the floor of the cavern drops away into a black pit. A single crossbow bolt or well-placed throwing rock would suffice to send him plunging to his death.

Precious stones set into the walls of the chamber glow with internal radiance, suffusing the Dwarves’ Cavern with soft, multicolored light. He can see another GreenShaft across the pit, and standing atop the shaft, a Dwarf warrior with a notched battle-axe in his hand. The warrior eyes him silently, while overhead shapes move in the pastel twilight. He can hear the scrape of boots on stone, the clank of battleaxes and shields, the whisper of bat wings. As his magical darkvision adapts to the dim light, he begins to see numerous Dwarves on FloatStone platforms all around him.

“Who goes?” demands the Dwarf on the GreenShaft.

“I am Perilous Jack, a dragonslayer by trade.”

“If ye be thief or aught other villain, ye’d best cast yerself into yon pit an’ save us all a bit of bother,” the Dwarf says conversationally.

“I come in peace,” says Perilous Jack. “I seek the castle of a Cloud Giant, that I might rescue a human maiden and her honor guard.”

The Dwarf raises an eyebrow. “And will ye be killin’ the Giant, then?”

The glimmer of a smile breaks from the Dwarf’s stern lips. “Yer alright by me, then – but the King’ll have the last word, of course. He likes to meet visitors. Of course, ye’ll need to leave yer weapons here.”

Considering that the Dwarves have him surrounded and outnumbered, Jack thinks it prudent not to argue. He unbuckles his sword and dagger and throws them across to the dwarf, who deposits them in the GreenShaft on which he stands. Jack does not offer the Pouch of Ghrul, and the Dwarves do not think to ask. When Jack is suitably disarmed, the Dwarf gestures and he leaps across, joining him on the GreenShaft. The Dwarf clasps his hand.

The Dwarf looks at him sidelong. “Our King is particular about the quality of the men he grants an audience. You’ll have to prove yourself first if you want to meet him.” The Dwarf digs in his pocket and produces an oversized die of carved and polished bone. There are images engraved on each side of the die: two sides are carved with the image of coiled worm or serpent, two with the image of a massive fist, and two with the image of a clawed, bestial paw. Fearghal Notchblade passes Jack the die.