Perilous Jack loosens his sword in its scabbard. “Ready.”

They say their goodbyes to Serra the True, who will return to her Temple for further divinations. Then Dark Simon begins to gesture and chant. Jack braces himself for the Bridge of Shadows, but today Dark Simon uses a different spell. Rather than being wrapped in shadows like a flurry of black feathers, instead the ground opens at their feet and a huge Cauldron emerges amid a cloud of smoke. The Cauldron hovers before the adventurers for a moment, lazily turning around and around. A moment later, a demonic little face appears over the edge of the Cauldron, eyeing Dark Simon mischievously.

“Come out of there,” the wizard says irritably. The Imp steers the Cauldron onto the stone near Dark Simon and hops from his vehicle in a single bound.

“Go on,” Simon commands, gesturing toward the flaming crack in the earth. “Get back where you belong.” The Imp whines piteously, but Dark Simon will not relent. With a petulant snarl at the humans, the Imp leaps into the flaming crack, which slams shut behind it.

Perilous Jack is none too thrilled about the idea, but it seems more pleasant at least than the Bridge of Shadows. He climbs into the Magic Cauldron and Dark Simon follows. 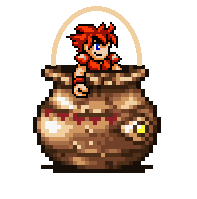 “Hold on tight!” the wizard cries, and completes his incantations.

The Magic Cauldron lifts gently into the air like a bubble borne upon a warm updraft, and Jack wonders why the wizard warned him to hold on. Then, with a sickening lurch that leaves Jack’s heart and stomach scrambling to catch up, the Magic Cauldron blasts off into the sky, into unnatural darkness and a night fallen too soon.

They are off to the Plateau of the Endless!