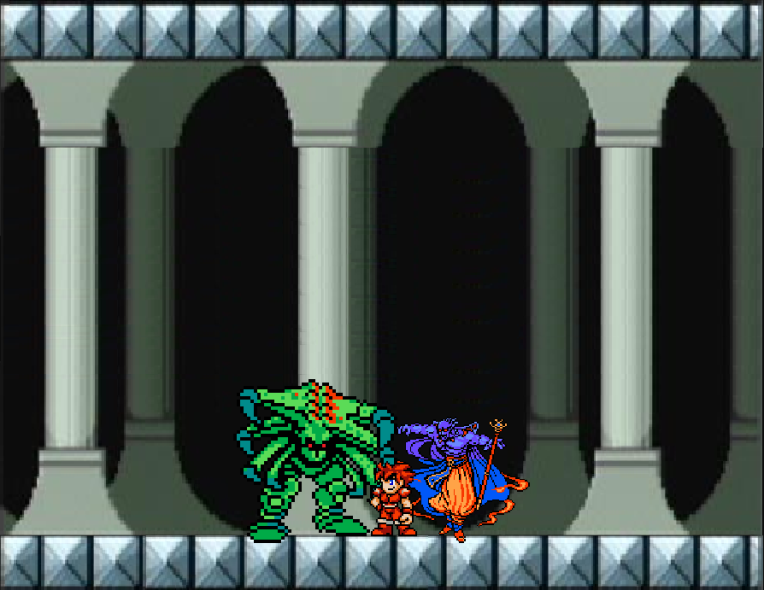 “Draco! Return this man’s possessions!” he barks. The Iron Claw bounds away, in the direction of the hall where Jack awoke to find himself captive.

“Tynplyt! Fetch a vial of Universal Solvent!” The Death Claw bounds in the opposite direction.

Garrulon smiles at Jack. “I shall see to supplies for your journey. How far lies the lair of the Ogre?”

Jack suffers the first stab of panic, but the Giant’s Knucklebones supply the answer in an instant. “Jack-Knife Jabbar dwells in a palace on the floor of the Gorgon River, accessible only through the whirlpool known as Hag’s Eye.”

Garrulon nods thoughtfully. “You’ll have to cross Red Ghurka Territory. The Goblins there worship the giant red centipedes that infest the region. Their mandibles would make short work of your armor, and their poison is terrible. The Gorgon River is in Mospleh, meandering among the Poison Canyons. You will need protection from the poisonous vapors.” He makes a decisive little cluck with his tongue and slaps Jack on the back.

Moments later Draco the Iron Claw returns with his weapons and other equipment, which Jack dons with real gratitude. Tynplyt the Death Claw emerges from another hall bearing a small steel chest carefully in its claws. The construct places the chest on the floor and backs respectfully away. Jack can sympathize; Universal Solvent can dissolve anything, even the supernaturally hard metal-crystal alloy of the Old Ones.

A few minutes later Garrulon the Ice Wizard returns with a sack slung over his shoulder. He lays the sack aside and produces a key from a chain around his neck, which he uses to unlock the steel chest. Nestled inside the chest in a cushion of diamond dust is a tiny vial made of pure diamond. “The vial will not withstand the Universal Solvent for long,” Garrulon warns. “Within a fortnight the Solvent will begin to leak out. The diamond dust and the steel chest will contain it for perhaps another three days. Once it is free it will destroy anything it touches.”

“I will move quickly,” Jack promises.

The Ice Wizard locks the chest again, and to Jack’s surprise, hands the chest to Tynplyt. A small panel opens in the construct’s leg, perfectly sized for the chest. The machine-man hides the chest away and secures the panel.

To Jack’s astonishment the construct’s head lifts up and slides back and its chest splits open. Inside the machine-man’s chest is a cushioned seat sized for a man, surrounded by levers and panels of lights and buttons.

“Tynplyt is smart enough to carry you where you wish and defend you from attack, but you can also control him from within. It is not the most comfortable mode of transportation, but I would recommend it for the more dangerous parts of your journey. The pinchers of the giant centipedes are no proof against his hide, and his air intakes are well-filtered to protect you from poison vapors.” He hands Jack the bag of supplies. “Here is food and water for your journey, and a few magic potions as well. I will detain you no longer. Good fortune to you, and bear my love to the Queen of the Fairies!”

Jack is overwhelmed by the Ice Wizard’s generosity. All he can say is “Thank you,” again and again.

He secures his new supplies in the Pouch of Ghrul and shakes the Ice Wizard’s hand, still clinging tightly to the Giant’s Knucklebones in his other hand.

The Death Claw does not look comfortable; still, he welcomes the added protection. Perilous Jack climbs inside the construct and the chest closes. The head slides back into place, and suddenly Jack sees the dim hall through the glowing eyes of the construct.

Together Tynplyt and Perilous Jack march from the Hall of the Ice Wizard, into the unknown.

Add the Vial of Universal Solvent, 3 Potions of Healing, 2 Potions of Antidote, and a Potion of Haste to the Pouch of Ghrul.