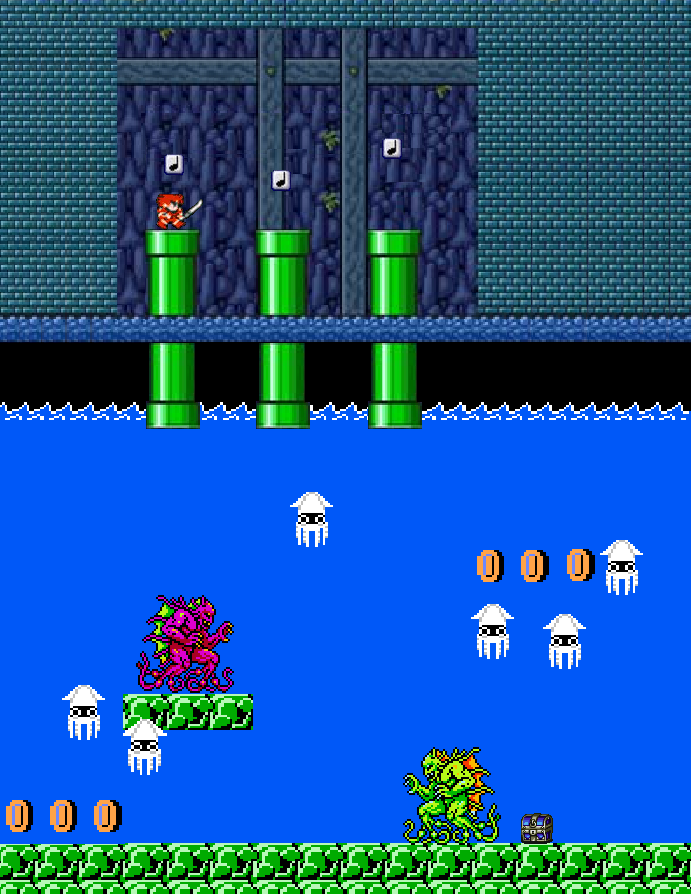 The ripples in water become ripples in reality, and Perilous Jack feels himself disappearing, swept away by the teleportation magic.

He reemerges in a tiny chamber deep in the earth. He is standing on one of three capped GreenShafts that, with the Singing Stones, form the only features of the rooms. The Singing Stones float above their respective GreenShafts at different heights, reminiscent of notes on a bar of music. The resemblance fires Jack’s imagination, and he leaps from stone to stone, striking them in turn. The three notes resound together in a simple melody, which seems to gain complexity the longer it lingers in the air. Suddenly all three GreenShafts open together and Jack plunges down through the shaft. As he falls he notices ladder rungs attached to the side; he can leave this way if he chooses. Below he sees darkness and hears the rise and fall of moving water.

He plunges into cold water, narrowly avoiding the venomous tentacles of a Moon Squid as he does. His eyes adjust quickly – just in time, for the water is home to a colony of Moon Squids, who quickly converge on his position.

What follows is a confused rush; Jack swims to dodge the lashing tentacles, strikes with his sword as best he can, surfaces from time to time – for there is an air-filled space between the surface of the water and the roof overhead – and plunges in again. He catches a glimpse of several large gold disks impregnated with FloatStone – the curious coins or medallions of the Old Ones, crafted by one of the giant slave races created by the Emerald Dynasty. He gains a brief reprieve from the Moon Squids and swims deeper . . .

. . . And again narrowly dodges lashing tentacles. This time his assailant is an enormous monster with a humanlike torso and lower limbs of writhing, suckered tentacles. A second emerges from the depths, and Jack is hard pressed to fend off their many tentacles. He espies a treasure chest resting on the stone floor below, and the sight fires him with new energy. Beating off the monstrous Squid-Men, he dives deeper, wrenches the chest open, and feels within. Among coins and gems, his hand encounters a strange shape, like a triangular piece of armor or chunk of stone – he cannot make it out in the murky water. The Squid-Men reappear, his breath is dwindling, and now he can see more figures approaching from the murk. It is time to leave.

He tucks the strange object in his pouch, slashes at a grasping tentacle, and strikes for the surface. He reaches the ladder inside the nearest GreenShaft just ahead of the Squid-Men. A tentacle seizes his leg as he gains the ladder, and for an instant his progress is stopped. The tentacles bears down with crushing force; his hands begin to slip – and then suddenly the creature below him shudders under a great impact. He turns his head to see the water thrashing as a pair of Squid-Men fight, perhaps over the right to a tasty morsel like Perilous Jack.

The warrior wastes no time awaiting the outcome of the fight. He swarms up the ladder into the blessedly dry room above and pauses to gain his breath before returning to the depths of Foldoron Lake.

He takes out the strange object and examines it closely. It is a triangular piece of alien steel, such as the Old Ones used to build the odd structures of the Emerald Dynasty. It is a shard only, having been broken – the gods only know how – off a larger piece, but it is heavily engraved with tiny, precise lines and circles. It could be a map, or a set of machine schematics, he does not know, but the fact of its great antiquity means it is considerably valuable. He tucks the Engraved Shard back into his pouch. If he already has another Shard like this one, he will discover that the two connect, forming a larger part of a whole.

Below him, he can hear the slither of tentacles on ladder rungs. Apparently the Squid-Men are amphibious, and have settled their dispute. There is no more time to linger.

Perilous Jack strikes the Singing Stones in reverse order, and the magic whisks him away, back into the depths of Foldoron Lake. Turn to 10.