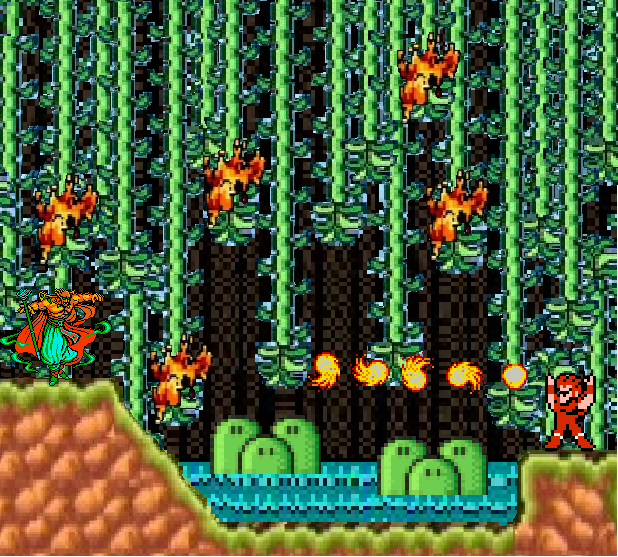 “Which only goes to prove that the fool is yourself.” With these words, he pops the Fire Flower in his mouth. The magic takes effect immediately, and Jack swells with the power and heat of the flames within him. The Druid pales and takes a step back, gesturing at the pool.

A dark shape begins to rise from the water, but scarcely three inches of it have emerged before Jack blasts the creature with a withering fireball, tearing it into flaming bits. Without hesitation, Jack flings fireballs left and right, setting the thick curtain of Beanstalks hanging from the ceiling ablaze. He throws fire behind him as well, and is rewarded with the screams of dying Eye Fangs and Stinging Asters. A blazing Roper staggers from the forest of Beanstalks and plunges into the pool, dying even as the flames are put out.

“Please!” the Druid cries. “No more!” In response, Jack launches a vicious string of fireballs in his direction, which detonate all around the Druid and knock him face first into the water. In seconds the Druid has surfaced, thrashing with panicked screams in the tendrils of some flame-maddened plant creature of his own creation. The Druid drags himself to a mound of vegetation projecting from the pool’s surface, his body still wrapped in numerous tendrils. The tendrils are wrapped around his chest and throat; he cannot breathe to speak or cry out, only extend a supplicating hand toward Jack . . .

The warrior leaps across to the mound where the Druid languishes and cuts him free of the grasping tendrils, sending another fireball into the water to discourage the creature hidden below. Then he drags the Druid across to the far shore and into the blazing jungle of Beanstalks. The Druid regains his feet and stumbles alongside the warrior, choking in the smoke.

Together they leap across the first pit to an earthen mound, and Jack makes ready to leap again, but the Druid pulls him back, gesturing to the third GreenShaft in the row that project from the ceiling.

Jack glances up and sees, past the burning wreckage of a knot of Piranha Plants, the faint gleam of a Warp Portal.

If you think Jack should trust the Druid and follow him through the Warp Portal, turn to 43.

If you think Jack should kill the Druid just to be safe, turn to 75.