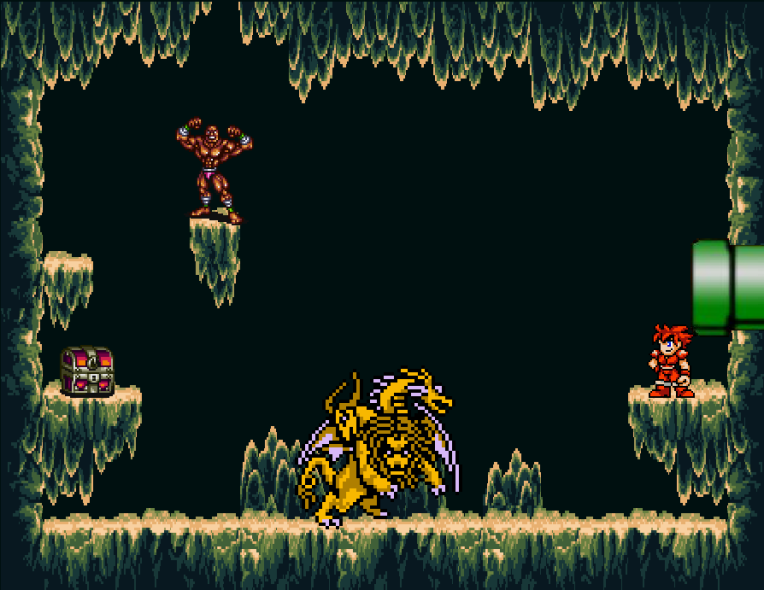 Xerxes issues a hearty, delighted laugh and gestures to the Stone Giant in the pit. The Giant advances and unscrews the cap on the second GreenShaft. Meanwhile Jack and Xerxes leap together into the pit and wait for the Giant to finish his work. When the cap has been removed, the Stone Giant suddenly seizes Jack in his immensely powerful arms.

“No offense, friend,” Xerxes laughs. He relieves Jack of sword and dagger, but overlooks the pouch at his belt. “This is a wrestling match, you understand, not a duel to the death – at least not to the death of my hard-won champion Chimaera!” He laughs at his own wit. “I will judge the throws and pins, and if you prove the victor, I will personally restrain the Chimaera while you exit the arena.”

With another laugh, Xerxes leaps into the GreenShaft. A moment later the Giant lifts Jack and drops him into the Warp Portal.

Jack emerges from the GreenShaft onto a stone platform overlooking the arena floor. They are in a natural stone cavern, the walls glittering with gold ore. Xerxes stands on a high platform well above the arena, safely out of reach of the combatants. On a platform projecting from the opposite wall stands a treasure chest.

“Cross the arena floor and claim your prize!” Xerxes cries. Suddenly a terrible noise shatters the silence of the dark arena chamber; it is at once a thunderous roar, an insinuating hiss, an obscene bleat, and the crackle of hungry flames. From the darkness the Chimaera of Crumbling Peak bounds toward Jack, its three heads snapping their respective fangs at him, its serpent tail hissing its frustration at being unable to reach. Jack weaves, dodges, and rolls wildly, all thought of wrestling dashed from his mind – at the moment survival is all he can manage.

Jack succeeds in breaking free for a moment, and realizes that he will need help if he is to win this match. From the Pouch of Ghrul he draws a Potion of Haste and a PowaShroom, washing the magical mushroom down with the Potion. In an instant, he has gained enormous strength and speed. He dashes forward, moving at least twice as fast as he ever has, and nimbly sidesteps the fiery breath, the slashing claws, the butting horns, and the gnashing fangs. He leaps upon the Chimaera’s back.

The serpent tail strikes at him, but with the Potion of Haste coursing in his blood, Jack is much the faster. He seizes the serpent in his hands, crushing the throat to force the jaws open. He hauls back on the tail, drawing on the enormous strength granted by the PowaShroom, and bends the Chimaera’s back, bringing the serpent tail nearer and nearer the triple heads.

With a dexterous sweep of his arm, he loops the serpent tail around the throat of the roaring lion head and hauls back, drawing the tail tight around the throat. The dragon head swivels to breathe at him; he seizes the dragon’s horn and twists the head around just as it breathes, directing the breath to wash over the goat head, which perishes in the flames with a ghastly bleat. In the same movement, he draws the dragon head near and pierces its throat with the exposed fangs of the serpent. The venom courses through the dragon head, sending it into wild convulsions. Meanwhile he continues heaving on the serpent tail, planting his boot in the back of the lion’s neck to increase his leverage . . .

With a choke and a wheeze, the Chimaera crashes to earth, all three of its principal heads slain. The body yet lives, although the poison is fast at work. Jack ties the serpent tail in a knot around the lion’s head so it cannot strike at him and clambers wearily off the dying Chimaera’s back.

In moments, the Chimaera of Crumbling Peak is dead. When Jack regains his feet, Xerxes frowns.

“This was meant to be a fair fight,” he grumbles.

“The Chimaera has magic; so have I. Fair fight,” Jack retorts. The wrestler nods slowly.

“Very well. Claim your prize and be on your way. The Red Ghurka will not molest you.”

In the treasure chest Jack finds a fine pair of gauntlets, engraved with the symbols of the Three Faces of the Great Tower – Gevura, God of Strength; Din, God of Justice; and Pachad, God of Fear.

“The Gauntlets of Gorodin,” Xerxes says. “They will increase the power of your blows. May they lead you to ever-greater deeds of heroism.”

“My thanks,” Jack says. He departs, leaving the wrestler to muse over the corpse of his pet. Outside, the Giant restores his weapons and silently points to the west. Perilous Jack nods his understanding and departs the Arena of Champions.

Remove a Potion of Haste and a PowaShroom from the Pouch of Ghrul. Put the Gauntlets of Gorodin in the ‘Gauntlet’ slot on Jack’s list of Equipment. Turn to 22.