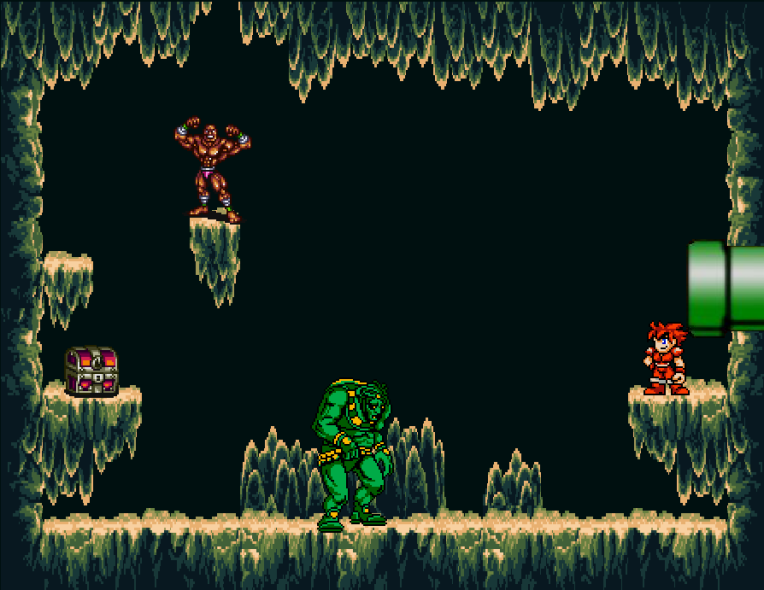 The warrior braces himself, trusting to the Belt and Gauntlets of Gorodin to help him withstand the terrible shock of the Gigas’s blow.

Stump dives, hands outstretched to tear at Jack’s throat, and Jack seizes his wrists. With the Gauntlets enhancing the strength of his arms and the Belt infusing his legs with the solidity of the mountains, Jack halts the charge of the enraged Gigas. For a moment they are locked in this position, feet digging for purchase in the sandy soil of the arena, giant wrists clenched in trembling hands, their teeth bared in effort scant inches from each other’s face.

“RRRR-Dead!” the Gigas howls. “Klickak dead! GRRRR-Xerxes kill him!” The frenzy in the Gigas’ eyes reaches a new peak. Suddenly Jack makes his move. Releasing the Gigas’ wrists, he ducks under his adversary’s body and straining with all the might of his limbs, lifts the Gigas up over his head. With a tremendous spring augmented by the Belt and Gauntlets, Jack hurls the Gigas onto the platform where Xerxes stands to enjoy the bloody spectacle he has created.

Xerxes staggers back in surprise and horror as the enraged Gigas climbs to his feet and casts around for a target on which to vent his wrath. Stump’s eye falls on Xerxes, and his rage is redoubled. With a scream that shakes the stone walls of the chamber, Stump hurls himself at Xerxes.

Jack waits calmly below until the screams, the thuds of fists on flesh, and the howls of rage have subsided. Soon Stump appears at the edge of the platform, stoop-shouldered again, morosely examining the blood on his hands. The poison has run its course, and now Stump has returned to his right mind.

“You did what had to be done,” says Jack. “Now take up the body and follow me.”

With the Gigas in tow, bearing the body of Xerxes the Indomitable, Perilous Jack enters the GreenShaft and emerges again into the center of Red Ghurka territory.