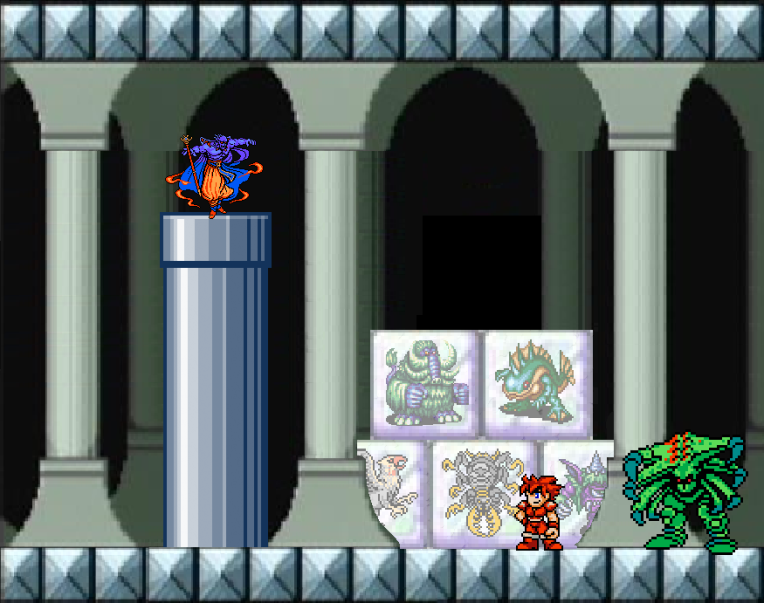 “But I am neither assassin nor thief. I came to Nolurrag looking for Magic Beans, which I require in order to rescue an innocent girl from the castle of a Cloud Giant. I offered him a Red Bead in exchange, but he insists he must have Universal Solvent to utilize the Bead. When I refused to obtain it for him, he caused his plant monsters to drug me. I awoke to find myself your captive; presumably he had me dragged here, thinking that my hand would be forced.”

The Ice Wizard seems a little caught off-balance by Jack’s candor. He frowns in consideration. “Then it seems we have a common enemy,” he concludes.

Jack shrugs. “Honestly, your dispute with the Druid is of no interest to me. I require Magic Beans, nothing more.”

The Ice Wizard considers further, and suddenly laughs. “Very well, warrior. I will help you, if you will help me.”

Jack raises an eyebrow. “I am hesitant to commit until I know the type of help you require.”

The Ice Wizard leaps from his high perch and lands beside Jack. He gestures the constructs away with a wave of his hand. “My name is Garrulon,” he says. At Jack’s expression, he nods. “Yes, and the Druid is Nolurrag. Our parents were not imaginative. We are twin brothers, he and I, and always we have been enemies. You have said you are no assassin, so I will not urge his death upon you – but I would not object to his discomfiture. I will give you Universal Solvent – it means nothing to me. When you return to his lair, make your way to the lower level. In the wall, just above a shallow pool of water, is a GreenShaft.”

“I have seen this,” says Jack. “The Druid stood before this very shaft when his plants drugged me.”

Nolurrag nods. “Pass through the GreenShaft. It will take you to the center of another chamber. Immediately overhead you will find a row of eight GreenShafts projecting from the ceiling, each inhabited by a Piranha Plant. I will give you a vial of pheromone which will attract the Piranha Plants. Use the pheromone to draw the first Piranha Plant from its burrow. Behind it you will find a Warp Portal leading to a hidden chamber, where the Druid keeps a store of treasure. I doubt he keeps his Magic Beans here – he has another hidden chamber for his seeds and such – but there will be other wealth worth taking. Teach him the price of his arrogance, and I will be well-requited.”

“I thank you for your advice,” Jack says.