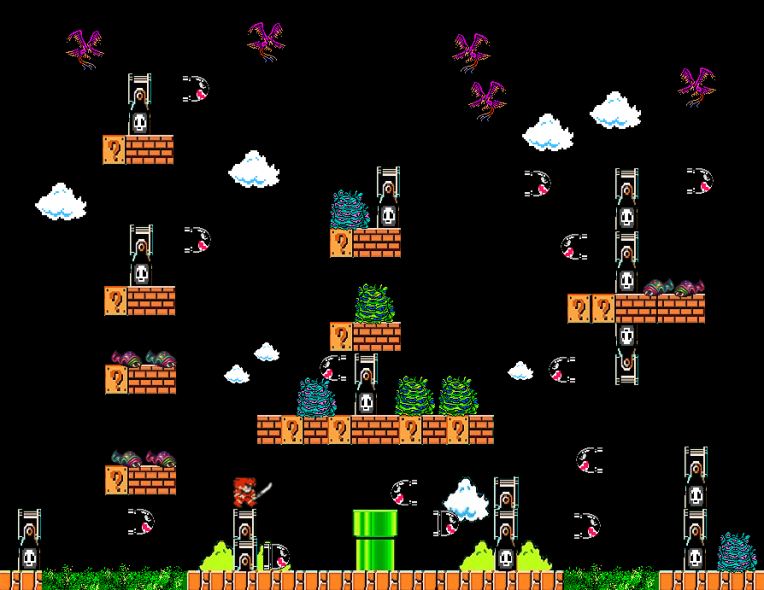 Although there are numerous Bullet Launchers, all arranged to overlap each other, their arrangement seems primarily designed to repel aerial approach. Even the presence of huge Eyemoebas on the upper platforms is little deterrent to him, for the ooze creatures move slowly and have little interest in giving chase.

Looking up, Jack sees a possible answer to the enigma. Overhead the Rust Birds wheel and swoop, screaming to each other in frustration. The presence of so many Bullet Launchers would make it suicidal for the Birds to dive for the GreenShaft – and yet, Jack has never heard of a Rust Bird entering such an enclosed space; neither is the metal of the GreenShaft itself palatable to the Birds. Nevertheless, the Rust Birds seem to have the greatest interest in the GreenShaft, and considerable effort has been expended to keep them away . . .

Although it requires all his athleticism to approach the GreenShaft while dodging and cutting at the numerous Black Bullets whizzing by, Jack manages the trick and gains the top edge of the GreenShaft. The shaft is open and dark, a metal ladder affixed to the side. A powerful smell of iron and water wafts up from the shaft, no doubt the cause of the Rust Birds’ excitement. All is silent below.

Dodging a final Bullet, Jack climbs down the ladder – and down – and down. At last, after what seems hours of climbing, the ladder ends at an elbow joint, connecting the vertical shaft to a horizontal one. He travels along the horizontal pipe for nearly an hour, weary of the journey before he’s even begun. There is nothing to see but curved metal walls, nothing to hear but the ringing of his own footsteps. At last the horizontal pipe ends in another elbow and another ladder going up, a much shorter one this time.

Jack pauses to consider where he might be. He recalls seeing a mountain not far from the island and its acid moats – perhaps the lair of the wizard he seeks is hidden inside the mountain. He shrugs, loosens his sword in the scabbard, and begins to climb.