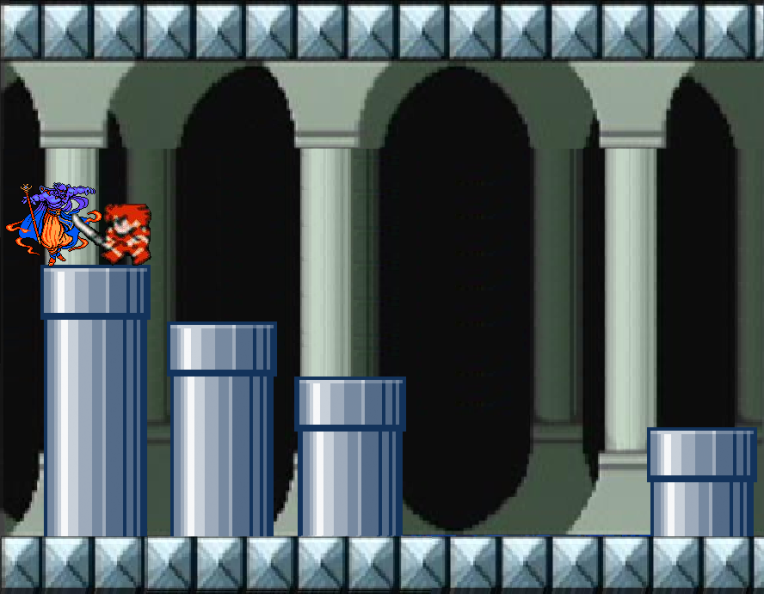 The hero finds his heart is not as cold as the magic of his adversary. He takes the wizard’s staff and flings it away, and then he lowers his sword.

The Ice Wizard looks at him uncertainly.

Jack sighs and rubs his face with his hands. “There is a young girl I know held captive by a Cloud Giant. To save her, I need a Beanstalk tall enough to reach the Giant’s castle. For which I need Magic Beans, which your brother the Druid can provide – but for a price.”

“Universal Solvent,” the Ice Wizard sneers. “He’s been begging and threatening me for years, in the vain hope that I will make it for him.”

Jack looks up in some surprise. “Make it? I assumed you merely possessed a vial or two.”

The Ice Wizard laughs and gestures around at the strange lair in which he lives, at the pipes, the metal walls and machinery.

“You don’t know what this place is? This mountain contains a stronghold of the Old Ones, a relic of the Emerald Dynasty. There are chemical laboratories and enormous stores of material, and I am an accomplished alchemist. I can manufacture Universal Solvent and many other things besides.”

Jack considers for a moment. “Do you possess the Universal Membrane?”

The Ice Wizard looks at him in surprise. “What do you know of the Membrane?”

Jack shrugs. “In the town of Tucreed there is a merchant named Drao Rennid, a friend of mine. He is a dealer in herbs and potions. He possesses a sample and uses it sometimes to absorb magical energies from the artifacts I collect on my adventures. He then uses the permeated Membrane to devise his own potions.”

The Ice Wizard is silent for a moment, clearly weighing Jack’s words. At last he gives a single nod. “I possess a piece of the Membrane, yes.”

Jack displays his empty hands to show that he means no threat, and then draws the Rune Sword. “This blade is bane to shapeshifters,” he says. “If this property is of interest to you, I will allow you to wrap the blade in the Universal Membrane. All I ask in exchange is a vial of Universal Solvent, and the freedom to call on you for the purchase of any other alchemical weapons you are able to create. You understand, I am a dragonslayer by trade and an adventurer by inclination. I have considerable wealth and a steady need for the products of a talented alchemist. And I am sure my friend Drao Rennid would pay handsomely to commission your work, as well.”

The Ice Wizard nods slowly. “Yes . . .yes, I will do this. I have no Solvent prepared; you will have to wait three days while I prepare the mixture.”

“Very well,” says Jack, and they clasp hands. “I fear I have enticed a flock of Rust Birds into your antechamber,” Jack admits.

The Ice Wizard waves his hand dismissively. “They will be quickly sated, and I have chemicals to repel them. I take it you reversed the ventilation fan?”

Jack nods, and the wizard laughs at his expression. “Three times my brother has come to assassinate me, and each time he has left his plants – which he claims to be more important to him than his own flesh – to face the wrath of my Iron Claws. He never hit upon the one weakness in my defenses. Well, good for you. I will set the machines to work making the ventilation shafts too narrow for a Rust Bird.”

He grins at Perilous Jack, and the adventurer cannot help but reply in kind.