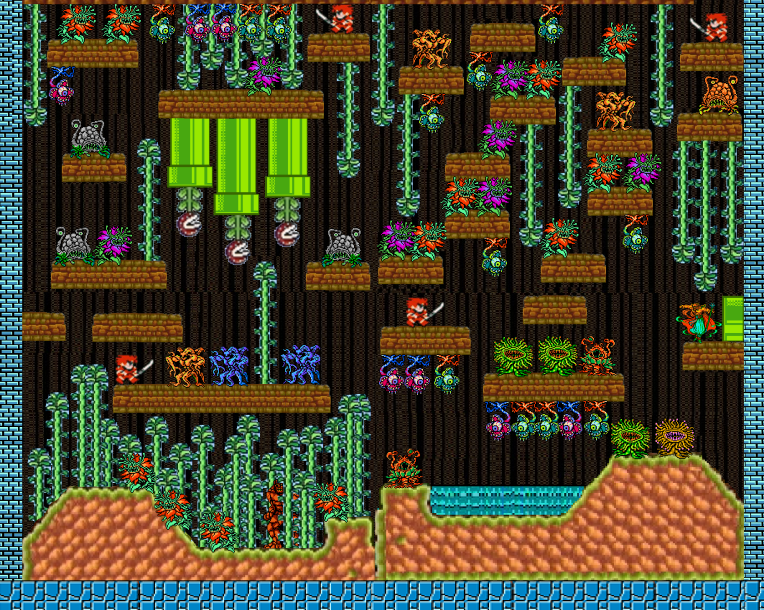 He lands in soft earth on a shelf projecting from the wall of the lair. A Beanstalk dangles from the ceiling before his face; he lurches forward and grasps at it for balance. A rustle of petals rouses him somewhat from his stupor and he swings his blade wildly, chopping off the head of a Death Blossom rooted in a platform beyond the Beanstalk.

Jack clambers around the Beanstalk and collapses to the platform lately occupied by the Death Blossom. A great eye fills his sight, fierce electric retinae burning into his mind like hot wires. For an instant he stands still, soaking in the horror of the Eye Fang’s gaze, until some latent fury encoded in the very muscles of his arms causes him to raise his blade and stab. The flower retreats, blinded. Confused and angry, Jack flings a fireball in a random direction and howls at the sight of the explosion, a riot of color and light . . . sparks lingering and dancing in the air long after the roar of the flames has subsided . . . brilliant multicolored motes dancing like fairies . . . he stumbles and falls, realizes in a languid fashion that he has been running, leaping . . .

. . . his mind surfaces briefly and he finds himself on a platform beside the burned-out shell of a Shambling Mound, which he has evidently just slain with a fireball, although he does not remember the act. The Shambler’s tentacles flail randomly, dancing out the creature’s death throes, and a few strike and wrap around Jack. The tentacles find little purchase on Jack’s metal breastplate, and he manages to hack his way through and continue deeper . . .

He is no longer certain whether he means to go down, up, or to one side or another, only that he must keep moving, keep fighting, keep hacking his way through the increasingly thick and hostile vegetation . . . that he must keep breathing, though he inhales more of the mind-bending perfumes with each breath.

A row of GreenShafts hang from the underside of a nearby platform. Suddenly certain that they contain treasure, Jack stumbles forward, only distantly aware that he is coughing, that he can barely breathe for the perfume in the air. The GreenShafts swirl before his sight, rippling as if they are reflections on the surface of a pond, swirling around and around . . . the head of a huge Piranha Plant erupts from the nearest, snapping at him . . . there is an explosion of flame . . .