Wherever this place is – and by the presence of real-world architecture, he cannot help but think he must be somewhere – the laws that once governed it have been suspended. All is pitch darkness, and yet he can see with the clarity of day. All is immanent, and yet he senses vast distance – and yet the walls seem to close in – the impressions cannot resolve themselves, as if he were trapped in a tiny space that is yet larger within than without.

All around stretch, warp, and wobble bits and pieces of the real world – a TowaShroom, a CacheStone, a line of FloatStone bricks, a GreenShaft from which emerges the snapping head of a Piranha Plant, skulls, coins, and weapons. A door drifts by, and a treasure chest, and there a cloud of swords swirls and spins like a swarm of bees. All these things drift past like flotsam and jetsam in a heaving sea, and as they move, they change – a brick becomes a flower, a tree becomes a door, a mouse becomes a village. In, through, and among these material things soar alien energies – blue flames and purple lightning, clouds of frost and rays of pain, and abstract shapes which seem to be at once powers and personalities. It occurs to Jack – and his thoughts come slowly, as if they sink through molasses to reach him – that the shapes are souls, flickering into brief contact with the chaotic substrate of this realm. Gracelessly, uncertain if motion is even possible here, Jack flails against the dark currents and imagines himself swimming forward – toward the center.

In time, if there is time here, he becomes aware of some subtle alteration in his surroundings, as if he were falling toward a source of gravity. Gradually the lucid darkness takes on a quality of blueness – a shower of fireballs erupt around him, and for a moment, he finds himself transformed into a fish – and then he is through, and the source of the blue dominates his vision.

It is indisputably the Nightcrystal. The only solid thing in this ever-changing landscape; huge where all else is tiny, immutable in the chaos. Blue radiation pours from the immense crystal in nearly palpable waves, and what it touches, it warps. The Nightcrystal fairly reeks of ancient evil, of the willful distortion of Creation. 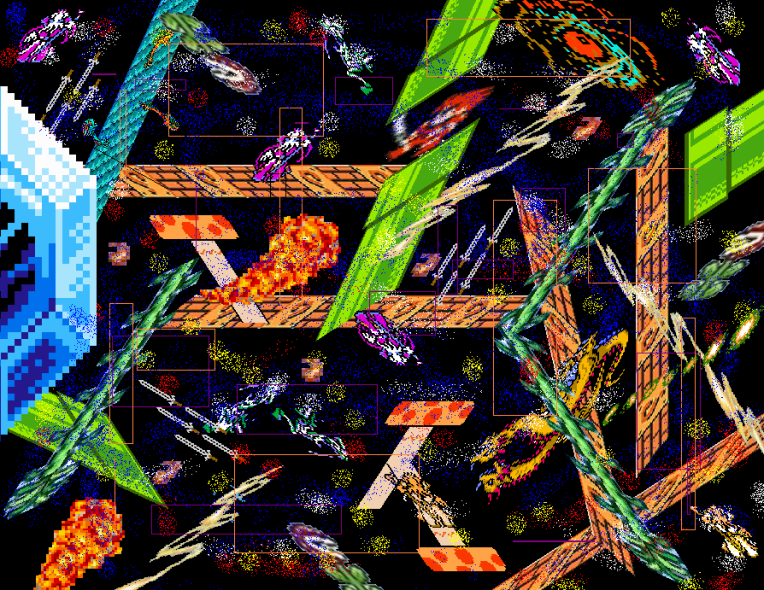 And suddenly Jack is not alone. Gates open around him, brilliant ovals of color, which rend the walls of this place and admit creatures. They are blasphemous, demonic, clearly creatures of another cosmos.

A Dragon with two heads is among them, and a nest of Abyssal Worms risen from their foul home in the Howling Pit. Then, greatest of all, an Abomination of the Cosmos, one of the foul star-wanderers long banished beyond the light of the suns by the Gods. These creatures strive in concert to reach the Nightcrystal.

Now more Gates open, admitting further monstrosities. First among them are the Illithids – foul humanoids with tentacled heads and horrific psychic powers. The Illithids are rarely encountered on the surface of Malkat, preferring the comforting darkness and cold of the Underworld, the endless stone corridors that perhaps resemble their home world. Next come a group of Beholders – and this is a fantastic shock to Perilous Jack, for the Illithids and Beholders are both far too evil and power-hungry to cooperate with each other. Yet the Beholders, great hovering eyeballs with fanged mouths and eyeball-tipped tentacles that shoot magic rays, seem to be in league with the Illithids.

The Illithids and the Beholders unite against the demon invaders, withering them with their magical energies. A terrible battle ensues, to which Jack is an unwilling and helpless spectator. Terrible magical energies are unleashed, unmaking the mutating flotsam around them and dissolving many of the fluctuating shapes, which Jack has come to identify with living souls. Ghastly undead creatures are created and swim through the maelstrom, to latch their hungry fangs into the palpating flesh of the Abyssal Worms. A trio of Illithid Wizards seems to tap into the Nightcrystal itself, directing huge storms of blue radiation at the Dragon, whose twin body is torn in half.

At last only the Abomination remains, and now all the Illithids and Beholders unite, tapping the Nightcrystal’s power again. The Abomination collapses upon itself, unmade by the tremendous power, and is drawn into the Nightcrystal. The battle leaves a toll upon the opposing side as well, for many of the Illithids and Beholders drift unmoving through the chaos, and many more find themselves trapped within the facets of the evil gem, alongside the vengeful soul of the Abomination they helped slay.

Then, with their rivals bested, the remaining Illithids and Beholders turn their attention to the Nightcrystal. They form a loose cloud around the gem and begin chanting and gesturing. A line of white energy forms across the surface of the gem from top to bottom, and then splits in the center from left to right, forming a blazing cross superimposed over the face of the Nightcrystal. The cross sinks into the material of the gem, and with a blinding explosion, splits the Nightcrystal into four pieces.

The Illithids and Beholders gather the Shards of the Nightcrystal and disappear through separate Gates.

The power of the Dreamfruit is waning; Perilous Jack calls again upon the name of Tifar’et, and feels himself drawn out of the Perilous Realm of the Nightcrystal and back into the humble abode of the dead Guardian.

Add the following to the Journal: Illithids and Beholders are working in unison! They have split the Nightcrystal into four pieces and stolen the shards.