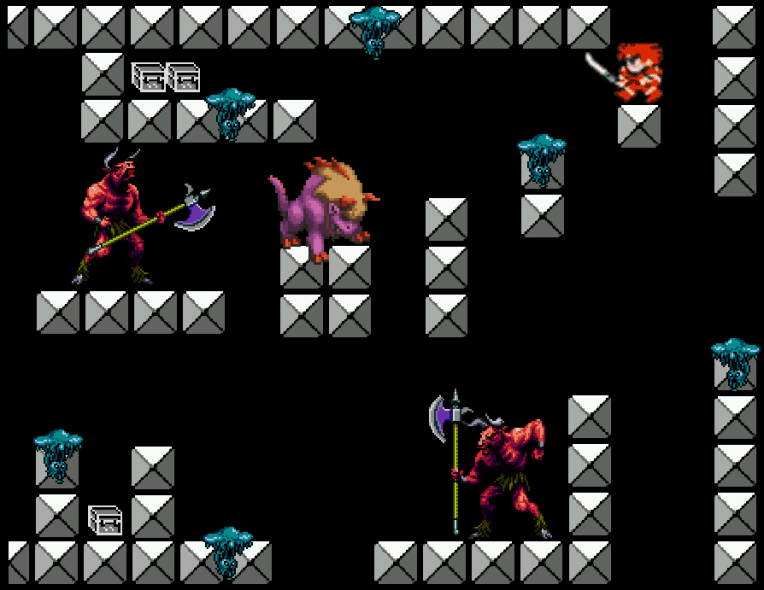 Raising his sword hastily – and why would he leave it half-buried under a heap of the curious brass tokens? – Perilous Jack slays the Minotaur with the aid of the PowaShroom still heightening his strength. The second Minotaur leaps into the small chamber before the death groans of the first have stopped echoing, actually trampling the body of its dying companion in its furious rush to assault Jack. The warrior suffers a heavy blow, stumbles over a mound of tokens, and by sheer luck manages to slash at the Minotaur’s calf as he falls. The beastman’s leg folds, pitching it into a nearby Black Slime. When the second Minotaur is dead, Perilous Jack eyes their curious weapons, sensing magic afoot – but he feels his mind tugged insistently away by the puzzle of the brass tokens.

He is busily at work on the seemingly insoluble puzzle, frustrated but doggedly persistent, when the battle-axes begin to glow again. This time he hardly notices as the Minotaurs emerge from the lavender twilight, but again he is able to save himself by dint of his heroic instincts. As before the Minotaurs seem unaware of each other; if they cooperated they might easily overcome Jack, but they fight with such blind and single-minded savagery that they are easily defeated in spite of their great power. 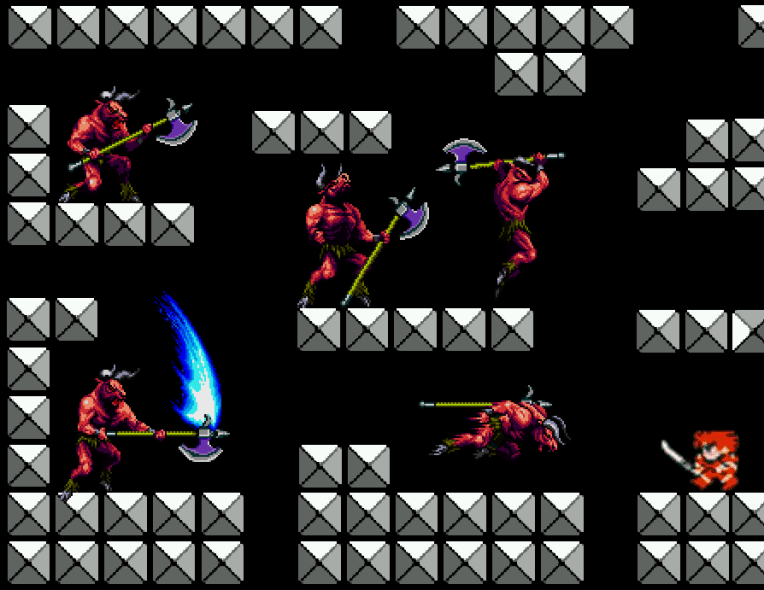 Something about the battle-axes tugs at his mind as the second of the Minotaurs dies – again – and now he actively resists the compulsion to attack the token-puzzle, instead concentrating on the strange weapons. A moment of clarity washes over him, and he snatches up the battle-axes and leaps from the chamber where he has wasted so much time poring over the brass tokens. He bears the weapons to the edge of the pit and flings them over, drawing his sword and leaping after.

In the next room, another Darkling Bull and a pair of Minotaurs armed with strange purple battle-axes await him, in addition to the omnipresent Black Slimes. Another treasure chest filled with enigmatic brass tokens sits in a narrow passage near the ceiling of the chamber. A pattern begins, of which Perilous Jack in his distracted mindset is scarcely aware. He leaps from platform to platform, fighting off Minotaurs and Darkling Kine, becoming momentarily involved in chests filled with brass tokens, the solution to the puzzle of the tokens briefly occupying him until his instincts rouse him to fight again. He slowly becomes aware of the consuming nature of the labyrinth into which he has stumbled.

Yet he seems to be making progress, he thinks. He has connected fifteen more brass tokens, creating a long, curving truncated cone – and at the rate it is growing, he reasons only a few pieces remains. If he can keep his sanity long enough and survive the attacks of the strange Minotaurs, he might be able to complete the artifact. And if he does, then what? He does not know.

Instead, he leaps, he fights, he grapples with his compulsive urge to assemble the brass tokens and his terrible impatience at how slowly the puzzle is coming together. He has forgotten the Frost Potion, Princess Vasilisa, the Breaking of the Nightcrystal, and the limited time he has before the Singing Stone slips back out of phase and he is trapped. Only the Labyrinth, the brass tokens, the growing artifact, consume his thoughts.