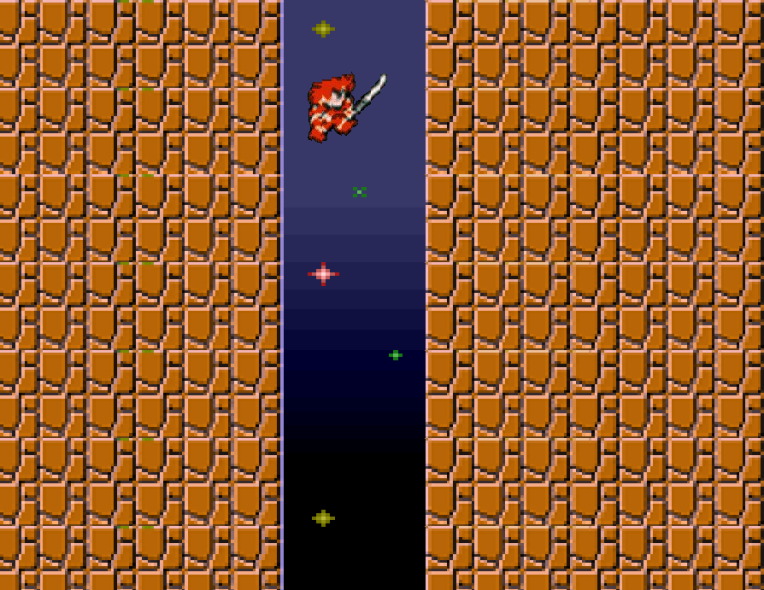 Yet even as he thinks this, the melody of the Singing Stone reaches his ears again and the music seems to wrap him in layers of warmth and security. To his astonishment, he finds that the closer attention he pays to the music, the slower he seems to fall. The twilight becomes deep shadow as he falls further from the failing light of the sky, and yet the music is light and life to him.

As he drifts on shoals of sound, he notices for the first time that he does not drift alone. There are motes of light floating in the pit with him; green and yellow – and a single, brighter point of red. The motes seem to shine and flicker like tiny stars, and he recalls the strange two-dimensional figures he encountered in the Realm of the Nightcrystal, the geometrical representations of living souls. He wonders if the stars he falls with now are likewise alive.

Even as he thinks this, the red star flickers at him in a pattern that he seems to recognize. It flickers again, and now he understands – the creature is singing in counterpoint to the music of the Singing Stone. The other stars, although they are smaller and weaker than the red star, likewise sing in chorus, creating a delicate fugue layered over and within the song of the Singing Stone. The music is lovely and sad, and gradually, as the song imparts its wisdom, Perilous Jack begins to understand.

The red star with which he falls is no other than the vanquished Red Orb that formerly guarded the Pit. The other stars were once guardians as well, although they have diminished over the centuries. When the Fairy Dust coating the Singing Stone loses its magic, as it must in a matter of days, the Stone will slip out of phase again, and a new Orb will be created to guard the Pit.

Now the music of the Singing Stone is so faint, Perilous Jack can hardly hear. The floor of the Pit swims into view and the warrior sets his feet on solid stone. The red star, which has fallen with him, now hovers overhead, flickering anxiously, as if it fears to be left alone. Perilous Jack extends his hand to the star, and it flashes brilliantly, the last of its light, and drops into his hand in the form of a small, gleaming Red Bead. The Bead seems to possess none of the animation of the star; it is a jewel, perhaps magical, but nothing more.

Puzzling over the fate of his curious companion, Perilous Jack pockets the Red Bead and turns to examine the entrance to the Labyrinth of Malkat.

Add the following to the Journal: Fairy dust may bring the Singing Stones into phase with reality, but the change is temporary. I shall have to hurry while I am here, or risk being trapped.

Make a note on the Equipment Sheet that only 8 doses of Fairy Dust remain.

Add the Red Bead to the Pouch of Ghrul and turn to 23.