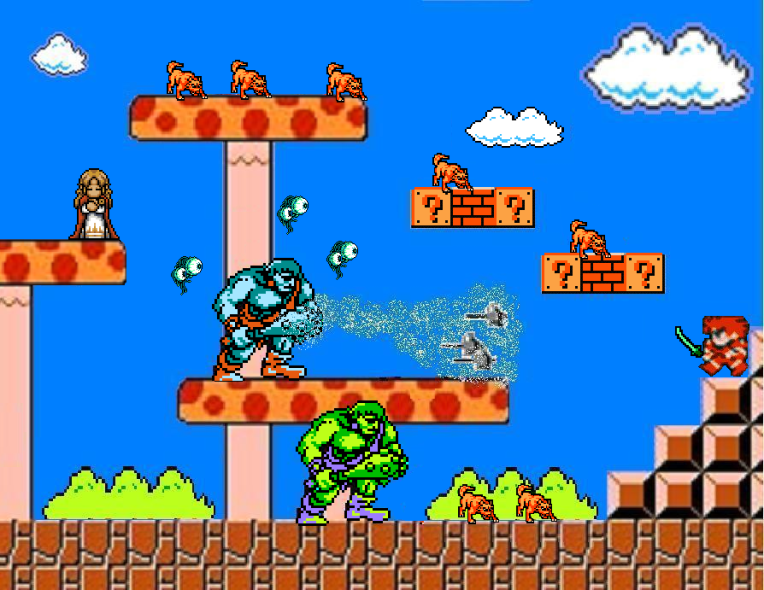 The Dagger scores a hit on the Ogre’s temple and the creature staggers back, opening its guard to Jack’s thrust. The Ogre falls dead, pierced through the heart.

Jack snatches the purse at the Ogre’s belt and stuffs it into the Pouch of Ghrul without looking at the contents, well aware that any delay could cost him the hostage. He leaps from TowaShroom to TowaShroom, bloodied sword in hand.

At the top of a stone ziggurat, Jack encounters the Ogre Mage and the second Ogre at bay. He descends the ziggurat slowly, drawing the Potion of Bane from his pouch. He does not hesitate to use the powerful Potion – Ogre Magi can be incredibly powerful, and two Ogres at once are certainly more than he can handle without help. With a swift motion, he applies the Potion to the blade of his Long Sword, and thus augmented, advances on the Ogres. Meanwhile, the Ogres’ pet Wolves advance menacingly toward Jack from above and below, leaping among TowaShrooms and brick platforms to get within pouncing range.

Though the Wolves are near enough to strike, the Green Ogre holds them back with growled commands in the guttural tongue shared by Goblins and Worgs. A second later, Jack understands the Ogre’s restraint of his savage pets, as the Ogre Mage suddenly unleashes a mighty spell at him – a potent casting of Icehammer, which sends a cloud of whirling hammers, lethal cold, and razor ice shards billowing in Jack’s direction. The Ogres’ hostage, a Fairy seated on a TowaShroom nearby, cries out a warning, but Jack is already on the move.

The Seven League Boots propel Jack just barely over the billowing Icehammer, saving his life. Even as he leaps, the Green Ogre snatches up the Fairy, hurls her over his shoulder, and lopes away toward a distant GreenShaft.

Jack lands on the ziggurat again, among a blinding swirl of ice. “I don’t have time for this!” bellows the Ogre Mage. “The Master waits!” As the magic cloud clears, the Ogre Mage casts a second spell, this time opening huge wings of shadow. He leaps into the air and flies away, leaving Jack to fight the remaining Wolves and wonder who the Master might be, to whom a mighty Ogre Mage defers. 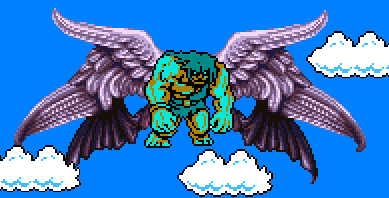 There is no time to examine the CacheStones here; as soon as the Wolves are slain, Perilous Jack is hot on the heels of the Green Ogre with the captive Fairy . . .

Remove the Potion of Bane from the Pouch of Ghrul.