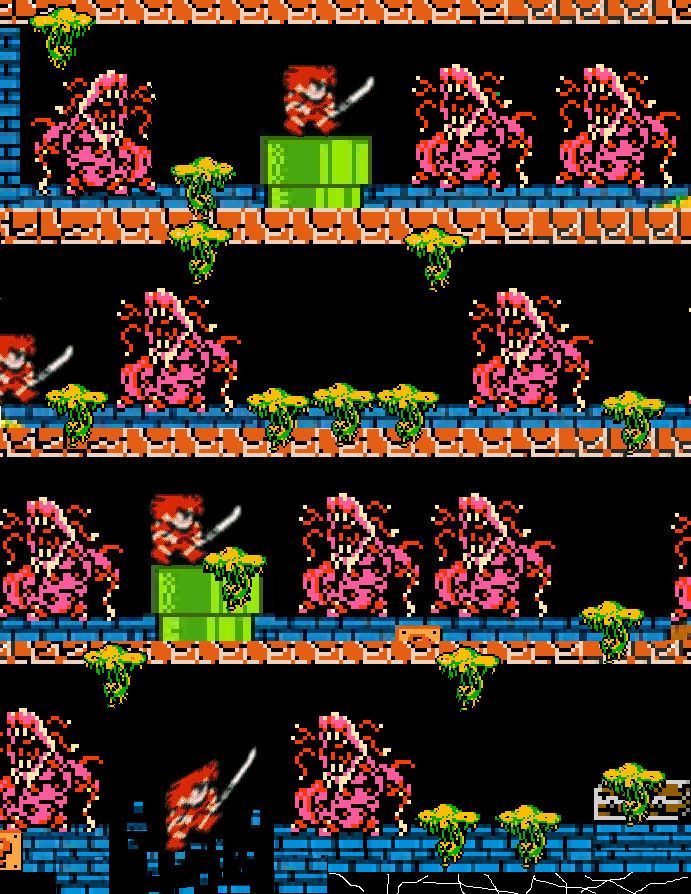 The walls of the GreenShaft are caked with filth, and the stench from the tunnel overhead is terrific. Apparently, the Ogres had been throwing their refuse up the pipe, and now that Jack has crawled out of the GreenShaft and stands blinking in the dim light of the tunnel, he can see why. The tunnel is swarming with scavengers – Green Slimes and Carrion Creepers, both of which customarily survive by scouring subterranean passages for meat, fresh or otherwise.

The Green Slimes are disgusting puddles of animated green goo, capable of dissolving any organic material – flesh, bone, clothing, even leather boots. They ooze across the floors, walls, and ceilings, occasionally lashing out with sticky pseudopods or toothy, oozing heads. Beyond the sea of Slimes loom the Carrion Creepers – disgusting fat worm-like creatures, some as large as a horse, with tentacles around their mouths dripping with paralytic poison. The scavengers, sensing him, begin to advance. Jack suddenly has second thoughts, but then through the murk he catches a glimpse of something familiar near the far end of the hall – treasure chests!

A Carrion Creeper’s tentacles slap against the warrior’s back, only his metal breastplate protecting him from the paralyzing poison, and Jack leaps into action, hacking and slashing his way through the filth-crusted bodies and dancing around puddles of acidic slime. Fortunately, the scavengers are not particular about what they eat – they are just as happy to stop fighting and dine on the bloody chunks of a chopped-up Carrion Creeper. Jack is almost within reach of the treasure chests – until suddenly the floor beneath his feet crumbles, and he falls among a shower of bricks and headless Carrion Creepers into pitch darkness.

Later, Jack will reflect that it was undoubtedly fortunate that he should land upon the bloated worm-body of his last Carrion Creeper victim, rather than upon the hard stone at the bottom of the shaft, but lying among, and covered with, the monster’s exploded guts, Jack hardly feels blessed – or very heroic. Nonetheless, he slowly drags himself out of the Creeper’s body and scrapes off the worst of the sludge. It seems prudent to imbibe an Antidote, give the number of welts upon his bare flesh, courtesy of the Carrion Creepers. He draws a bottle from his pouch and drinks the bitter green liquid down, then examines his surroundings.

Jack’s ability to see in the dark, courtesy of Serra the True, serves him well today, for the faint torchlight of the Ogres’ lair, which Jack presumes lies just on the other side of the wall behind him, cannot penetrate this lightless shaft. And what waits for him at the bottom of the shaft is undeniably worth seeing.

Remove an Antidote from the Pouch of Ghrul and turn to 10.