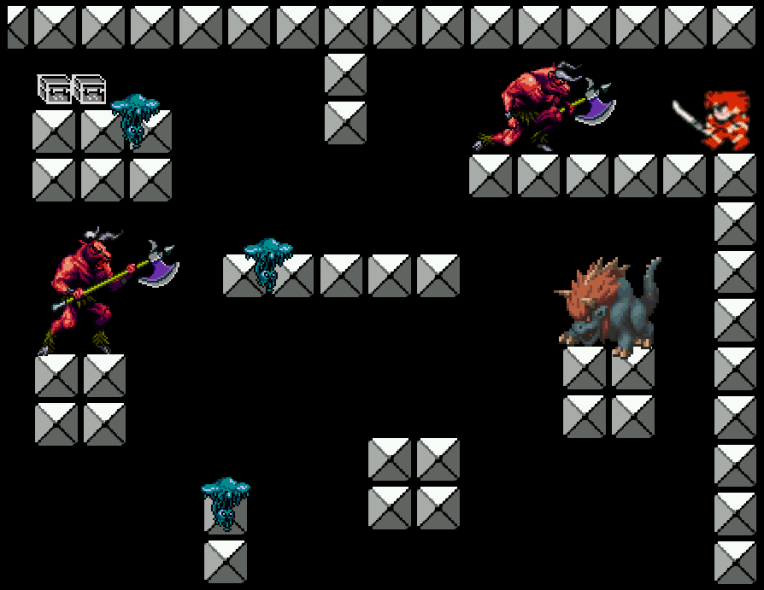 The Minotaur charges and Jack leaps into the combat, trying to ignore the jingle of brass tokens bulging from his every pocket. When the Minotaur is dead, Jack immediately takes up its weapon and runs his fingertip over the rune engraved in the blade. It is clearly one of the fabled Runes of Power, used the world over to perform wondrous tasks even in the absence of a magician. If he could command this power . . .

This time Perilous Jack keeps hold of the weapon as he advances deeper into the labyrinth. Moments later, a purplish haze emerges from the blade of the weapon in his hand, and suddenly a second hand grips the haft of the battle-axe as well; the powerful clawed hand of a Minotaur. A moment of profound disorientation grips Perilous Jack; how many Minotaurs are actually in the Labyrinth? He has killed a dozen at least . . .

A brief tug-of-war ensues, until Jack settles the issue by flinging the Dancing Dagger of Danzibar in the beastman’s face. The Dagger dodges the snapping fangs and buries itself in the creature’s blazing eye. The body falls and dissipates into purple smoke, which settles into the blade of the battle-axe.

He takes up the weapon again, frustrated. If he were a spellcaster he might be able to reprogram the rune to serve him . . . perhaps, if he can get the thing out of the Labyrinth and bear it to Dark Simon . . . but Dark Simon was in Saîd the last he heard; how can he bear such a weapon across a continent, being attacked every few minutes by a resurrected Minotaur?

The problem is dashed from his head when he catches sight of a likely looking niche in which treasure chests may be concealed. Indeed, in a steel chest near the ceiling of the room, Jack discovers another thousand or so of the brass tokens. He lays the battle-axe aside, the problem of the Rune of Power forgotten, and sets to work. His absorption is almost complete, save for a single odd incident. The noise of clattering metal distracts him from his puzzle long enough to observe a pair of Minotaurs pouring baskets of brass tokens into a treasure chest several platforms below him. For a moment, this seems significant, but the puzzle lures his mind away again, and he returns to the tokens in front of him.

An hour – or two – and several slain Minotaurs later, he encounters a twenty-third configuration of brass token, which completes his puzzle. Now he attaches the pieces he has assembled and pauses to admire the completed artifact. It is a curving Bull’s Horn, which now that it is assembled Jack can see bears a Rune of Power upon the side. The entire artifact briefly gleams with golden radiance, but nothing more. Perilous Jack slips the Horn into his pouch and continues deeper into the puzzling labyrinth, leaving his battle-axe prize forgotten on a FloatSteel platform.

Remove the Brass Tokens and add the Brass Horn to the Pouch of Ghrul. Turn to 24.