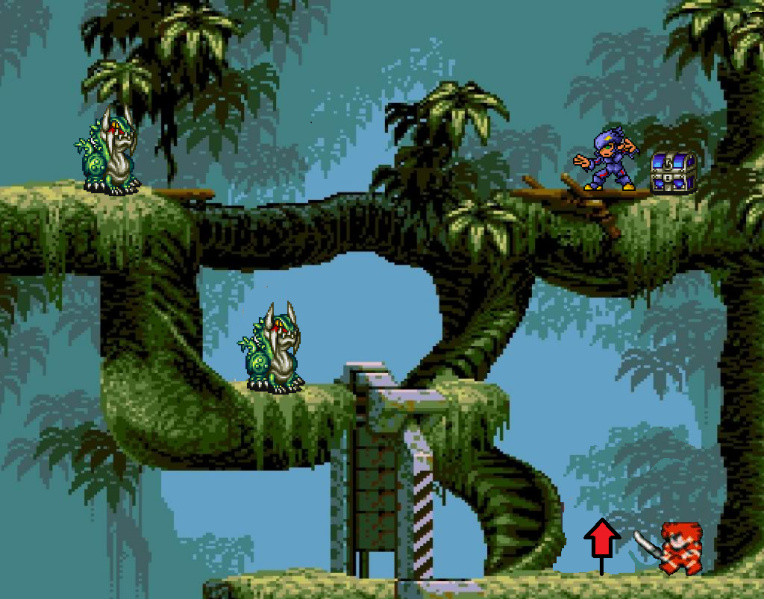 As soon as he gains his feet, he looks up – and into a huge pair of sparkling golden eyes framed by gleaming white horns. He scrabbles for his blade, but the creature merely sniffs him disinterestedly. It sits back on its haunches, and now Jack can see more clearly that it is a Tyranox Whelp.

The Tyranox is a curious creature, capable of developing in two very divergent ways. In the wild, a young Tyranox will exhibit considerable intelligence and dexterity with its forelimbs, but as it ages and grows it will gradually become a brutish, unreasoning killing machine standing taller than a castle keep, and its forelimbs will scarcely grow at all, becoming nearly useless.

However, Tyranox hatchlings that remain among intelligent creatures like humans, lizardfolk, elves, and dragons, will usually remain quite small for their kind – topping out at twenty feet from tail to snout – and retain their bright minds and adaptable fingers. They are commonly used by these races as guard dogs, dray beasts, battle mounts, and familiars, while a few of the very brightest are even trained in the use of simple weapons.

The Whelp confronting him now wears an empty battle harness intended for a human rider. The foliage overhead rustles and Jack sees a second Whelp on a higher vine platform, also wearing a harness, this one like a howdah for transporting bulky cargo. The second Tyranox Whelp sniffs him and sits, licking huge chops.

“It seems they like you,” a voice says from the foliage behind him. Jack’s hand strays to the hilt of his blade, and the nearest Whelp issues a short, admonitory growl.  “Unless you give them reason not to,” the voice concludes.

Jack turns as the man emerges through a curtain of huge leaves. He is a lanky man in cobalt armor, wearing a helmet reminiscent of a falcon’s head, also cobalt. He cocks his head to one side, examining Jack with one eye and displaying a beaky nose. Suddenly Jack knows where he has heard the name – Wilhelm Falconfury, Thirteenth Baron of Calderstone, was one of his father’s enemies during the Duke’s War. Alton must be the late Baron’s son – not the eldest, since Jack recalls attending the installation of the Fourteenth Baron Calderstone during the Armistice Years.

“Welcome to the Haberdashery,” Falconfury says, gesturing through the curtain of foliage. Jack follows him in, deciding for the moment not to reveal his recognition of the Baron’s son. Beyond the curtain is a wooden platform, erected in the intersection of several branches. A huge wooden treasure chest, painted blue and bearing the crest of House Falconfury, sits at the edge of the platform, evidently the cargo the second Tyranox is meant to haul. Falconfury leans negligently against the chest and draws a dagger, using it to clean under his fingernails.

“Now then,” he says. “Judging by your age, the white wolf tattoo on your bicep, and the interlocked Hartshorne and Ghlomus crests embroidered on your weapon belt – the ones you’ve been trying to hide with the edge of your cloak – I’d say you are Sir Dauntless of the White Wolf Order, Fifth Duke of Hartshorne, and the eldest son of the man who killed my father.”

Jack doesn’t bother moving, well aware of the proximity of Falconfury’s dagger and the placement of the Tyranox Whelps.  “I go by the name Perilous Jack now,” he says quietly.

“The petty intrigues and betrayals of our fathers are of no interest to me,” Falconfury concludes. “I barely knew my father anyway – always off somewhere waging war or fighting in ridiculous crusades in Mahorela or Tranan. My older brother Corentin is no better. I have been a wanderer from the day of my father’s funeral, and never regretted a moment of it. But lately I’ve been thinking . . . if my brother turns out to be the callous tyrant my father was – and I think he will – then perhaps it’s time I returned and did something to help the tenants. After all, their courage saved my mother and her children from raiders when my father was off waging his stupid wars. What do you think?”

Jack considers carefully. “It has always been the way of our people that a man walks the path of his father, even if that path leads to Hell itself.  It takes a bold man to walk his own path.”

The Baron’s son considers this for a moment and then puts his dagger away. “You came here looking for merchandise,” he comments. “And I have many articles of interest. Some are the standard fare of adventurers like us – potions and the like – and a few are a bit more . . . exotic. However, I should tell you that I only share the more unusual items with my friends.”

“And do you consider me a friend?”

Falconfury frowns. “That depends. I am planning to return to my ancestral lands this coming spring, with a few good men behind me. I have a feeling my brother will not appreciate my visit. There may be . . . unpleasantness. I would like to know that the men who ride with me believe in what I am doing and are willing to help me achieve it. If I thought I could rely on your assistance for this endeavor, then I would truly consider you a friend.”

Add the following to the Journal: Alton Falconfury wishes to retake his ancestral lands from his tyrant brother. He will call on me in the spring to undertake the quest.

If you think Perilous Jack should ask to see the standard adventurer’s gear, turn to 19.

If you think he should avow his loyalty to Falconfury and ask to see the unusual items, turn to 5.